Packing for the first leg of our RTW was tough! Not only were we camping our way through Europe (with a tent, etc), but we were going through an array of temperatures – from Iceland to Southern Italy. On top of that I really wanted to wwoof and I had no idea what type of clothes to bring. Then I had to pack all this stuff into a backpack! Aghh!

During our time on the farm I took a lot of mental notes on some of the most important items we needed – some we had with us, some we wished we had. So if you’re planning on wwoofing and wondering what to bring this list is a pretty good starting point. Keep in mind most likely you will get really dirty on a daily basis! 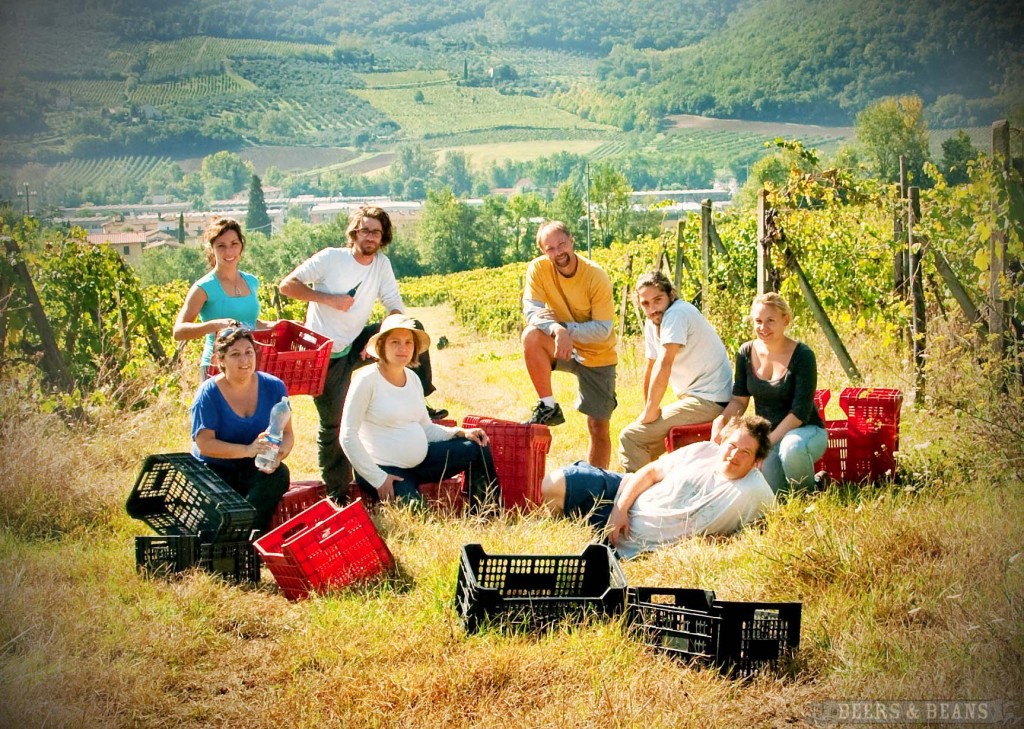 1. Quick Dry Clothes – This is so important since most places you wwoof will not have a dryer and in Tuscany at least, it took a full 2 days for regular clothes to dry. I had 1 pair of quick dry pants and some days they were stiff from caked on mud, dirt & sticky grape juice. An extra pair would’ve been awesome.

2. ExOfficio Underwear – Technically this could be lumped in with the above item but having clean underwear is not an underrated item. A couple pairs of clean, quick dry underwear to switch off and on with is worth the investment. If you can find quick dry socks snag ’em. I didn’t have any and it took FOREVER for socks to dry on the farm. A couple of times I had to borrow socks from other people.

3. Headlamp or Small Flash Light – We never needed this during the day but it really came in handy when we had to walk back from the train station late one night. The farm was perched on top of a large hill with a very long, dark & winding, dirt driveway. There were no lights on the secluded, somewhat creepy dark walk among the vines. Oh thank you little headlamp, you made the walk a wee bit less scary.

4. Bug Spray – Did not have this, really wished we did. By the time we left the farm I was covered in tiny red bumps. Turns out they were small bites from minuscule spiders that lived in the grapevines. I don’t even want to think about the ratio of bugs to grapes in every bottle of wine. Lemme tell you – it ain’t good. There are a lot of bugs on farms.

5. Sun Block – I have olive skin and I rarely burn so I didn’t really need this but if you burn easily make sure you bring some. We spent most days directly under the warm Tuscan sun and getting a sunburn is a really easy in the field.

6. Big Sunglasses or a Hat – ULTRA IMPORTANT. Like I said, we were out in the sun most days and having shade over your eyes is a really good thing.

7. Language Book – We hardly spoke a lick of Italian when we arrived on the farm. Thankfully some people in our wwoofing group spoke a little bit and we were able to get by. Without them I can’t imagine the insane amount of confusion that would’ve ensued. A small language book will help you out heaps! As an added bonus we understood basic Italian after a couple weeks on the farm – Yah!

8. Lightweight Rain Jacket with Hood – It rained a few days and because harvesting grapes is a time sensitive job we had to work through most of them. Having my waterproof rain jacket was irreplaceable on those days.

9. Shampoo & a Nail Clipper – Bring a LOT of shampoo. Each day it seemed that my hair was knotted and full of burrs. I used a lot of shampoo because I was always dirty. A nail cleaner would’ve been nice since my nails were gross and dirty every day. After a while we gave up trying to clean them.

10. A Going Out Outfit – A couple nights we went out to the local pub and it was nice to put on non-farm clothes! You never know what you might do on your time off so having some non-work clothes is a good thing.

11. One Recipe You Know by Heart and Can Cook for a Large Group of People – Our second night on the farm we were in charge of cooking dinner for about 10 people. Randy is a big fan of SpaghettiO’s and while I like to cook, we had spent the past year living on the boat and cooking the bare minimum on a hot plate. Not exactly gourmet. We hid our anxiety about it but honestly that was a big “Oh Sh*t” moment for us. We didn’t really know anyone yet and we were terrified of making a horrible dinner. Thankfully the garden had plenty of eggplants and we made my old stand by, Eggplant Parmesan, with a lot of interesting little side dishes. Luckily, enough wine makes everything taste better!

12. Waterproof Shoes or Rubber Boots – Every day we started work while there was dew on the ground. The weeds were high and I always ended up with cold, wet feet (even though my hiking shoes were supposed to be waterproof). I ended up wearing a pair of rubber boots I found on the farm. If they didn’t have them I would have ended up with raisins for toes.

13. Vitamins, Band-aids, Etc. – I few of us got sick on the farm. Of course, I was one of them. I tried Israeli sage tea, a strange German concoction involving a purple onion & brown sugar (and strangely it worked!) and a couple other things when I was under the weather. Really I should have kept up a little better from the get-go with my vitamins. Technically your host should supply first aid gear but having some Band-aids and other health related items will definitely come in handy! I acquired many a blister on the farm.

14. Water Bottle – The walk from the vineyards to the villa was a long one and it got hot picking the grapes. Having a large refillable water bottle was priceless!

15. Sleep Sheet/Sleeping Bag– We had nice, clean sheets on our bed but the silk sleep sheets & sleeping bags we had provided just enough extra warmth on the colder nights when there were no extra blankets.

16. Camera – This goes without saying but there were so many amazing photo opportunities on the farm and that doesn’t include the pictures you’ll want to take of all your new friends. Make sure you have a camera and tons of memory cards.

17. Relaxing After-Work Clothes – After 8 hours of manual labor and a quick shower it was SO SO SO nice to put on a pair of clean yoga pants, a hoodie and a pair of slippers. It was always too early to change directly into pajamas but having some comfy clothes was something I looked forward to at the end of every day.

18. A Really Good Sense of Humor – I saved this one for last because it just might be the most important! We laughed the entire time we stayed on the farm – I’m serious! I think I added 20 years to my life just by laughing day in and day out! Not only was everyone really funny but there were just some things you had to laugh at. Before we all started laughing at life, a few of us were pretty grumpy dealing with the seemingly nonsensical & ancient way work was done on the farm. When we started going with the flow and laughing at the Soviet era machinery & seemingly backwards style of work time on the farm became downright hysterical and more fantastic with each day.

19. A DSL Computer Cord – We had internet on the farm but not Wifi. My plans to catch up on work were dashed quickly since 7 out of 8 volunteers had brought a laptop with them. Only one person was smart enough to bring their own cord (it wasn’t me or Randy). Another wwoofer was still working for a company and conference calls almost every night. He ended up going to an electronic store and buying a splitter and another cord. It helped out a lot but between everyone’s Skype calls, travel research & work meetings it was pretty tough to get online long enough to get work done. If you’re bringing a laptop and planning on wwoofing for an extended period of time bringing your own cord is a pretty good idea.

There you have it – my essential Wwoofing pack list. Of course you might need a few other/different things depending on where you are going and what type of work you are going to do but this list will get you headed in the right direction. Writing this post made me so nostalgic for our days at Cerreto Libri. I felt so happy on the farm, really it was hard to remember a time I had been happier and less stressed. I can’t wait to wwoof again – I just wish I could take all the people we worked with to the next farm as well!

Stay up to date

Subscribe to the newsletter to receive news and updates from WWOOF.NET

This website uses cookies to improve your experience while you navigate through the website. Out of these cookies, the cookies that are categorized as necessary are stored on your browser as they are essential for the working of basic functionalities of the website. We also use third-party cookies that help us analyze and understand how you use this website. These cookies will be stored in your browser only with your consent. You also have the option to opt-out of these cookies. But opting out of some of these cookies may have an effect on your browsing experience.
Necessary Always Enabled
Necessary cookies are absolutely essential for the website to function properly. This category only includes cookies that ensures basic functionalities and security features of the website. These cookies do not store any personal information.
Non-necessary
Any cookies that may not be particularly necessary for the website to function and is used specifically to collect user personal data via analytics, ads, other embedded contents are termed as non-necessary cookies. It is mandatory to procure user consent prior to running these cookies on your website.
SAVE & ACCEPT