How to travel and work around the world with WWOOF

When it comes to WWOOFing, you just have to roll with it.

A storm was brewing in northern Italy, moody clouds rolling over the valley. Inside a farmhouse, my friend and I were dusting shelves of antique books and ornaments. Not something we expected to be doing on our WWOOF stay, but neither had we expected to find a papier-mâché chicken suit in our bedroom.

Our host, Silvia, was a tough, middle-aged woman who ran a small-holding complete with vegetable garden, fruit orchard, goats, and chickens. Her English was basic, but she particularly liked to use the term “strong woman” whenever mothers, independent women, and high-achieving ladies in general were mentioned. 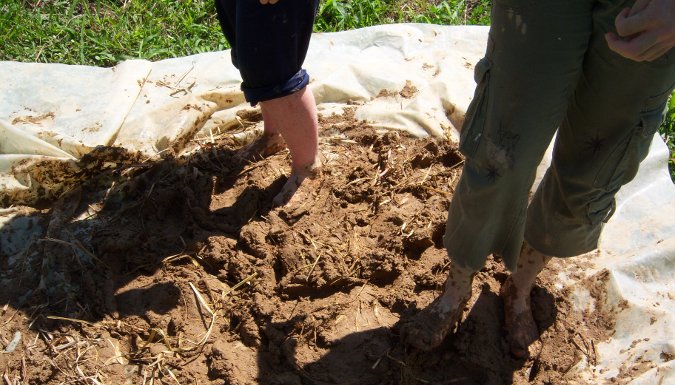 As we dusted, lightning illuminated the valley. Silvia was in the kitchen preparing a dinner of goat meat, potatoes, and salad, all organic produce from the farm. We had taken no part in sacrificing the goat to the gods of gastronomy, but we had harvested the potatoes and salad that morning, which made them taste especially good.

The builders who were renovating the barn next door joined us for dinner along with the third volunteer on the farm. Italian conversation flowed, accompanied by a generous helping of laughter. My friend and I understood little (our vocabulary extended only to soft fruits, garden equipment, and motivational lady talk), but hand gestures and facial expressions sufficed. The other volunteer, an American girl who was WWOOFing primarily to improve her Italian, was soaking up the organic language lesson.

Red wine and rustic bread accompanied the meal, both made at nearby farms and exchanged for Silvia’s homemade goat’s cheese. Out there, produce was currency. We had been introduced to this and many other principles of sustainable living during our stay. Never again would I underestimate the value of a good wheel of cheese.

At the end of the night, Silvia informed us of the next day’s tasks: weeding the asparagus beds, picking fruit, and making hay in the afternoon, should the sun be shining.

Our inexperience in all things farm-related had not been a problem since we arrived. There had been a few crossed wires, like when I threw leftovers into the trash instead of adding them to the compost and got told off, but on the whole we found that if you’re willing to learn and don’t have an aversion to dirt, bugs, or early mornings, you’ll get by just fine.

Round the World with WWOOF

WWOOFing stands for World Wide Opportunities on Organic Farms. WWOOFing is a service that matches people looking for learn on farms with farmers. It’s more a loose affiliation of like-minded groups using the same name than one large international organization. In order to become a WWOOFer, you need to sign up for the national organization in the country you want. There is no international WWOOF membership, so you’ll have to buy a membership from each WWOOFing country’s organization (WWOOF is made up of almost a hundred organizations). Annual membership usually costs around $30 USD per country. You don’t need any previous experience in farming to do this, just a desire to work.

As you can imagine, WWOOF opens endless opportunities on an extended-travel trip. If you make your way around the world visiting a selection of the 99 countries that participate in WWOOF, you can save tens of thousands of dollars over the course of a year. You can also learn skills, absorb languages, and make friends. 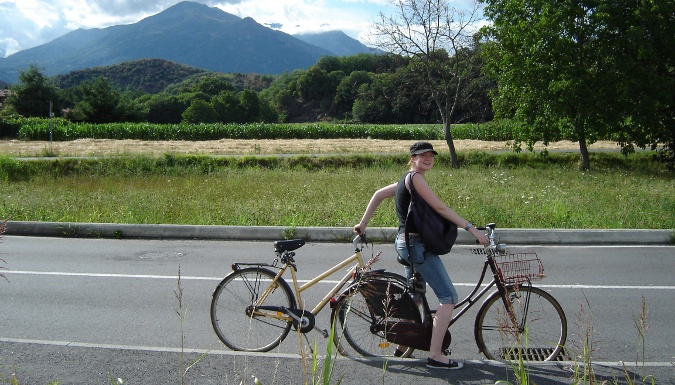 We had joined WWOOF Italia for a modest fee of 25 euros from a computer in our English dorm room. This is the way it works: visit the WWOOF website, click through to your destination country of choice, and go through their membership application.

Once you’ve filled out the online membership form and paid the fee, you’ll be sent a list of participating farms in your country of choice and can decide which ones to contact.

Each farm description will tell you something about the host, their farm, and their expectations. Read it carefully and ask for accommodation details, examples of work, weekly routine, and food arrangements before you commit. You can also ask whether they have specific house rules and if they’re fluent in English. If they’re not, don’t be put off; this could be a great opportunity to learn a new language!

“Farm” is a fairly lose term. Eco-communities, commercial farms, vineyards, and back-garden vegetable plots are all found on the WWOOF Italia list, and this is also true of most other host countries.

Shortly after joining WWOOF Italia, we were sent a list of over a hundred farms. Deciding to spend two months in Italy as part of our gap year inter-rail, we contacted a couple of farms that sounded appealing, one in the northern region of Piedmonte and one in Tuscany, with the intention of staying one month at each.

I always check the travel routes and ticket prices when I’m choosing a farm to ensure that getting there won’t be too expensive. Volunteers must pay their own transport costs, so if you’re traveling on a budget, ticket prices can have a huge impact on which farms you apply to.

In the case of Silvia’s farm, we found that we could get a flight to Milan with a low-cost airline and then take the train to Asti. Silvia met us there in her beat-up old car. Altogether the journey cost less than 50 euros.

Granted, Silvia was a bit of a legend, and I have encountered WWOOF hosts on my travels that I haven’t got on with as well. On the second farm in Italy, we were asked to move a huge pile of firewood that was full of scorpions and had to refuse, then later felt that we were spending too much time weeding flower beds. In this case, you can speak openly to your host and try to find a solution.

If you really don’t like a place and want to leave, you have every right to do so, but volunteers are expected to be respectful of their hosts and give them sufficient notice unless it’s an emergency. In the end, we left the Tuscan farm a week early because the situation didn’t improve, but out of the more than 30 farms I’ve visited across the world, this has never happened again.

On a farm in the Ecuadorian cloud forest, there were an incredible amount of fun activities that we could get involved with. Making chocolate, coffee, pasta, and yogurt from scratch were fantastic learning experiences, as was making a cob bench with several of the other volunteers (cob is a natural building material, and feet are the best tools for mixing it!). Because the farm was also an eco-community and nature reserve, the tasks changed every day and were immensely varied, from studying the native trees to helping install a wind turbine.

All in all, WWOOF is a cheap way to travel, a great way to learn, and a sure-fire way to have a whole load of adventures.

Stay up to date

Subscribe to the newsletter to receive news and updates from WWOOF.NET

This website uses cookies to improve your experience while you navigate through the website. Out of these cookies, the cookies that are categorized as necessary are stored on your browser as they are essential for the working of basic functionalities of the website. We also use third-party cookies that help us analyze and understand how you use this website. These cookies will be stored in your browser only with your consent. You also have the option to opt-out of these cookies. But opting out of some of these cookies may have an effect on your browsing experience.
Necessary Always Enabled
Necessary cookies are absolutely essential for the website to function properly. This category only includes cookies that ensures basic functionalities and security features of the website. These cookies do not store any personal information.
Non-necessary
Any cookies that may not be particularly necessary for the website to function and is used specifically to collect user personal data via analytics, ads, other embedded contents are termed as non-necessary cookies. It is mandatory to procure user consent prior to running these cookies on your website.
SAVE & ACCEPT